All Collections
Dilution Course
What Are At The Market Agreements (ATM)?

What Are At The Market Agreements (ATM)?

At the market agreements are a common way for small companies to raise cash.

An in-progress ATM often puts a constant downward pressure on the stock price. This process can last from hours to days, with trading volume and the aggressiveness of the company being the main determining factors in the duration of the offering.

The issuing company engages an investment bank to create an ATM agreement, which would then allow the company to sell newly issued shares on the open market up to an specified, predetermined amount, such as $10 million. Think of it as the company having access to a broker that allows them to hit the sell button on a trading platform, except they are selling shares that previously didn’t exist.

Before an ATM can be used, it must be registered with the SEC, which is done through a shelf-take down from an existing effective shelf registration statement (see What is a shelf registration? An effective shelf is one that has received EFFECT status from the SEC, giving the company the go-ahead to conduct the deal). The investment bank usually takes zero principal risk because it is simply acting as an agent to sell shares on the open market for a percentage fee, which is usually 3%. Because the shares are sold directly on the open market, no investment fund is directly involved in participating in the offering as is the case with traditional secondary offerings.

On May 5th 2020, Capricor Therapeutics (CAPR) filed a prospectus supplement 424B5 to sell up to $40m worth of shares through an ATM agreement with investment bank H.C. Wainwright. The company wanted to take advantage of the recent market liquidity and demand generated by its positive trial results for a coronavirus treatment.

In the latest quarterly report filed on May 14, the company disclosed that between “May 4, 2020 and through May 13, 2020, the Company has sold an aggregate of 1,800,000 shares of common stock under the May 2020 ATM Program at an average price of approximately $7.34 per share for gross proceeds of approximately $13.2 million.” Judging from the average price sold, the company likely sold small amounts on each day to minimize market impact. However, their selling still had some negative pressure on the stock price as evidenced by the predominantly red daily bars that followed. 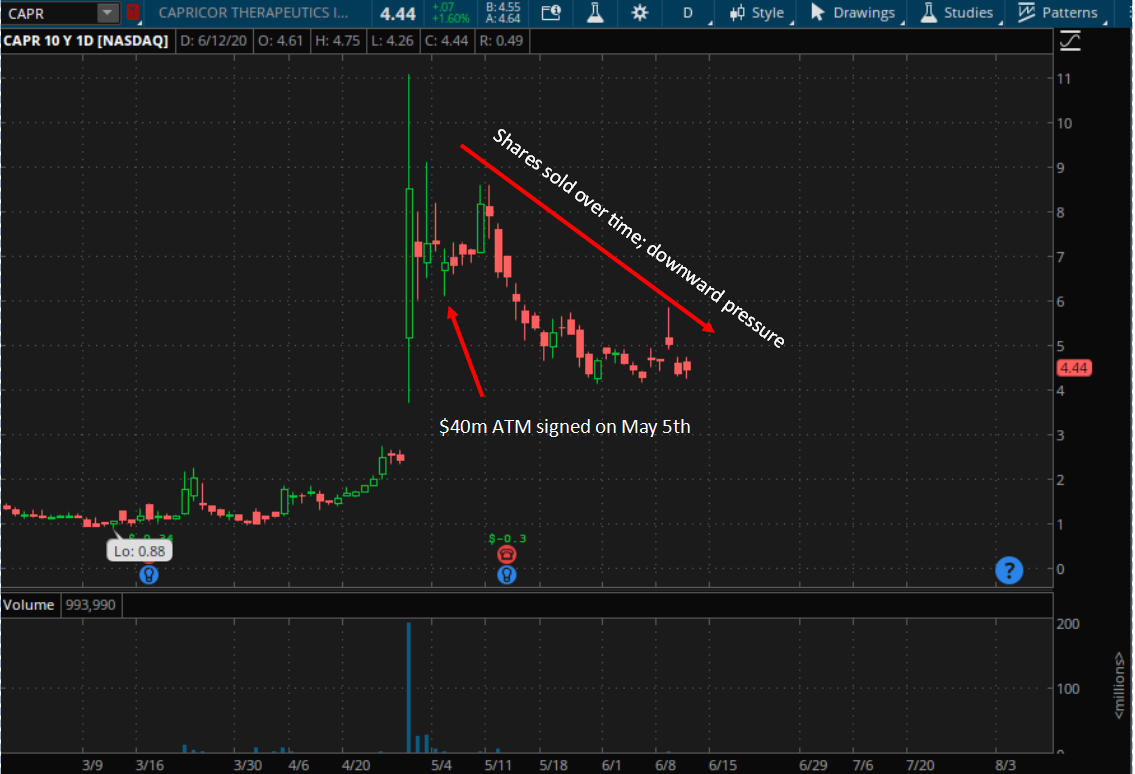 Factors influencing the impact of ATM:

Trading Volume - How much negative pressure an ATM has ultimately depends on how much is sold relative to the trading volumes that day. All else equal, the higher the trading volume and thus demand, the lower the negative impact from the ATM because the additional supply is readily absorbed by willing buyers. This is why companies tend to pump their stock with press releases to generate demand before using an ATM.

Valuation - The company’s current valuation also plays a key role in determining whether an ATM will be used. If management believes that the current stock price is too high relative to what they think it’s worth, they are more likely to take advantage of the situation to issue equity. Therefore it is completely possible that a company will NOT use its ATM even if the stock gaps 100% on positive news if management believes the news is worth 200%. Determining a company’s valuation especially in the presence of high uncertainty is an art and outside the scope of this website. A trader will need a deep understanding of the company and industry to determine a reasonable range of possible valuation scenarios. After determining such a range, then the trader can anticipate that the company will likely use its ATM at the higher end of the range and thus act as a resistance point on the stock price.

Investment Bank - The legitimacy of the company and the investment banks it engages with can also help in determining the ATM’s impact. The larger the company, the more likely it is to have reputable investment banks and investors. Such companies will also likely have access to other forms of financing that aren’t as dilutive and may not even bother with using the ATM. As a heuristic, if the company is larger than $150m market cap and has banking relationships with at least middle market banks and above, the ATM is going to have less of an impact (we’ll talk about investment banks rankings in another section).

Cash needs - A company is also more likely to use its ATM if it is strapped for cash and has immediate cash needs. The company’s current cash can be obtained from the latest balance sheet and the cash burn can be estimated from the cash flow statement under total cash flow from operations. If a company has only a month of cash left and no other sources of financing, there is a high likelihood of the ATM being deployed on any day with liquidity.

In conclusion, just because a company has an ATM doesn't mean a stock will fade. It is more likely to fade if it is a nano-cap, has low relative trading volume, over-valued, engaged with lower tier boutique investment banks, and cash strapped.