All Collections
Dilution Course
What is the IB6 restriction or Baby Shelf Rule?

What is the IB6 restriction or Baby Shelf Rule?

The babyshelf rule was created to prevent a nano cap company from continuously diluting its shareholders using a shelf registration statement, though there are ways to game it. The rule states that if the value of a company’s public float is less than $75m, it can only raise ⅓ of its float value over the previous 12-month period. It is extremely important to know how the “value of the public float” is calculated. Instinctively most people just take the share price multiplied by the float. But the definition used by the SEC is:

Because the company can use any closing price within the last 60 days, it will always choose the highest closing price during that period to maximize the value of its float. Therefore a company may have an incentive to pump its stock to achieve a high closing price to increase its value of float before using the shelf registration. In addition, when a company raises new shares, it increases the float but it can continue to use the same high closing price in the last 60 days. In some extreme scenarios it is possible for the company to go above the $75m float value mark by issuing shares, which then allows the company to issue even more shares since it is no longer restricted by the ⅓ cap. This is a giant loophole that the SEC overlooked and sometimes abused by nano cap issuers.

Since this is less than $75m, the company can only raise ⅓ of it or $8,974,386. The rule also states that this is the max amount the company can raise in a 12-month period, so we need to subtract any amount it raised in the past 12-months. The company raised approximately $11.74m in January 2019, and since the current limit is less than what it already raised in the last 12 months, MBOT cannot raise any money off the current S-3 and is “float restricted”. They would either need to wait until January 2020 so the $11.74m is no longer included in the 12-month total OR increase its value of public float.

What about after the first pump on December 23, when the stock closed at $10.11? 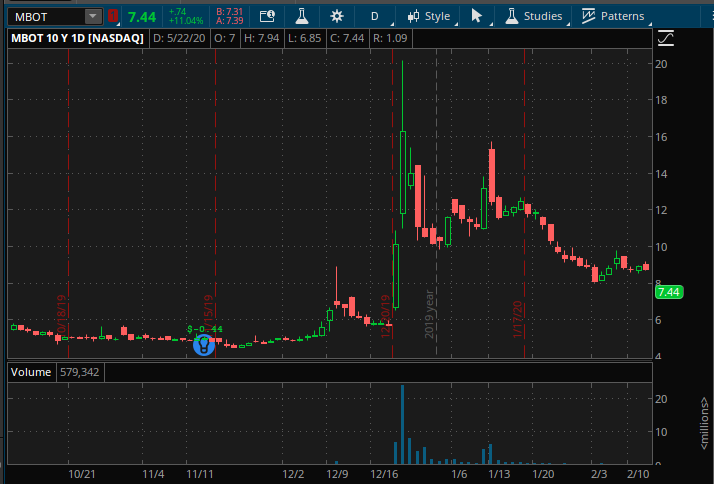 ⅓ of this is $13,245,408 and is above $11.74m so MBOT can raise the difference, which is $1.51m. However, $1.51m is a trivial amount of money and the technical pattern on the strong daily breakout suggested a highest close was easily attainable. At the higher close of $16.28 the next day the new value of float was:

⅓ of this is $21,328,906 and is above $11.74m so MBOT can raise the difference, which is approximately $9,588,906. This is the new limit it can raise and a meaningful amount of capital for MBOT. Not surprisingly, on December 26, MBOT announced a registered direct offering of 912,858 shares off the shelf for gross proceeds of $9,585,009, which was essentially the maximum it could raise. However, the story is not over yet. What is the new value of float now after the offering?

Now that its value of public float is above $75m, it is no longer restricted to the baby shelf rule. The max amount it can raise is now simply the total capacity of the shelf ($75m) minus what it has raised since March 31, 2017. The new limit is now:

This is the best example of the case where raising money actually increased the limit that a company can raise. MBOT used this new limit increase to its full advantage by raising TWICE again, $10m on December 27th and $10m on December 30th. These offerings caused the stock to drop intraday each time from $14 to $10.

The above example is one of the more complicated cases but it demonstrates how the math works in calculating public value of float and the baby shelf restriction. Most companies typically just issue up to their baby shelf cap and wait until they can raise again.