All Collections
Blog
Offerings, Investment Bank Tiers and Why It Matters for Small Cap Stocks

Offerings, Investment Bank Tiers and Why It Matters for Small Cap Stocks

Offerings, Investment Bank Tiers and Why It Matters for Small Cap Stocks 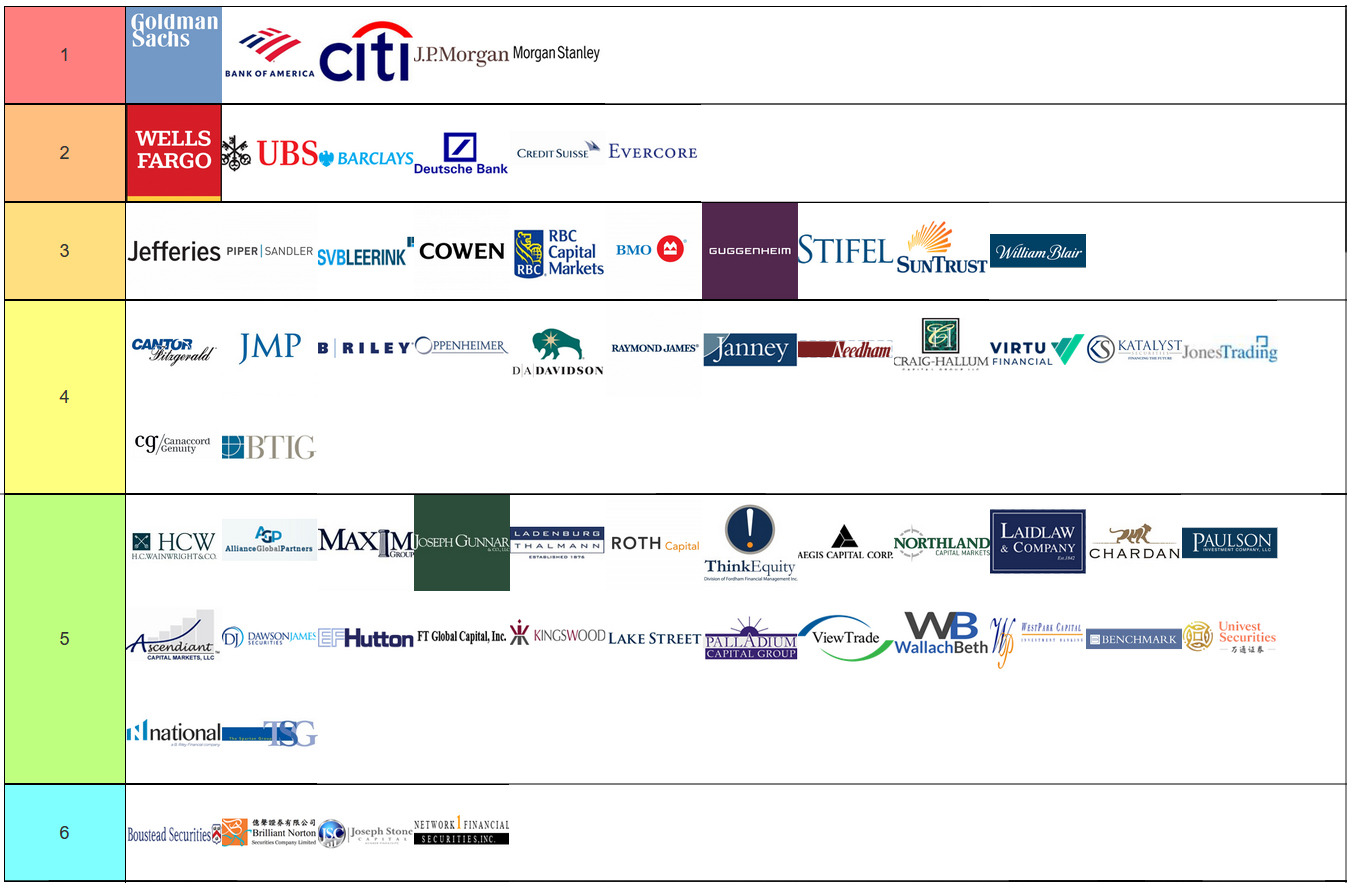 Let’s face it, most small cap traders and investors have experienced dramatic losses when a company conducted a big discounted offering.

Since most small caps (less than $150m market cap) have weak fundamentals, small cap offerings are usually issued at a large discount to the pre-offering price in order to attract investors. Riskier deals also tend to issue more warrants, which are effectively call options that can be turned into stocks. As a result, many of these deals result in significant dilution to existing shareholders.

In this note, we will analyze over 1,300 offerings from the last three years to examine how offerings impact returns in the immediate and medium time frame (2 weeks to 3 months), and impart you with actionable insights to increase your win rates.

What are stock offerings in the context of small caps?

The 1,394 offerings that make up this data set includes two types of offerings.

This is commonly known as the bought deal, where the bank assumes risk by buying the securities from the company at a set price and then selling it to others.

More concretely, the investment bank or syndicate commits to buying a fixed quantity of newly issued shares (+15% over allotment if desired) from the company at a negotiated price minus an underwriting discount (usually 7%). The bank determines the price by assessing demand through its buyer network or through other means if necessary. Can be sold through both S-1 or S-3 shelves.

RDOs are similar to a best effort private placements deal, where new shares are issued directly to a few buyers, except the shares are already registered so they can be freely traded on the open market. The investment bank only acts as an agent and receives a lower placement fee (usually 3%). Generally issued through shelf takedown (S-3).

In both types of offerings, a large block of new shares is sold which usually results in the market reacting negatively to the news. The magnitude of this reaction will depend on a few factors that we discuss in the following sections. Dilution Tracker also tracks private placements (unregistered offerings), but those are not included in this dataset as generally the immediate market impact is low, unless offered at a significant discount with high warrant coverage.

Digging Into the Data

Overview of total small cap deals in the past three years 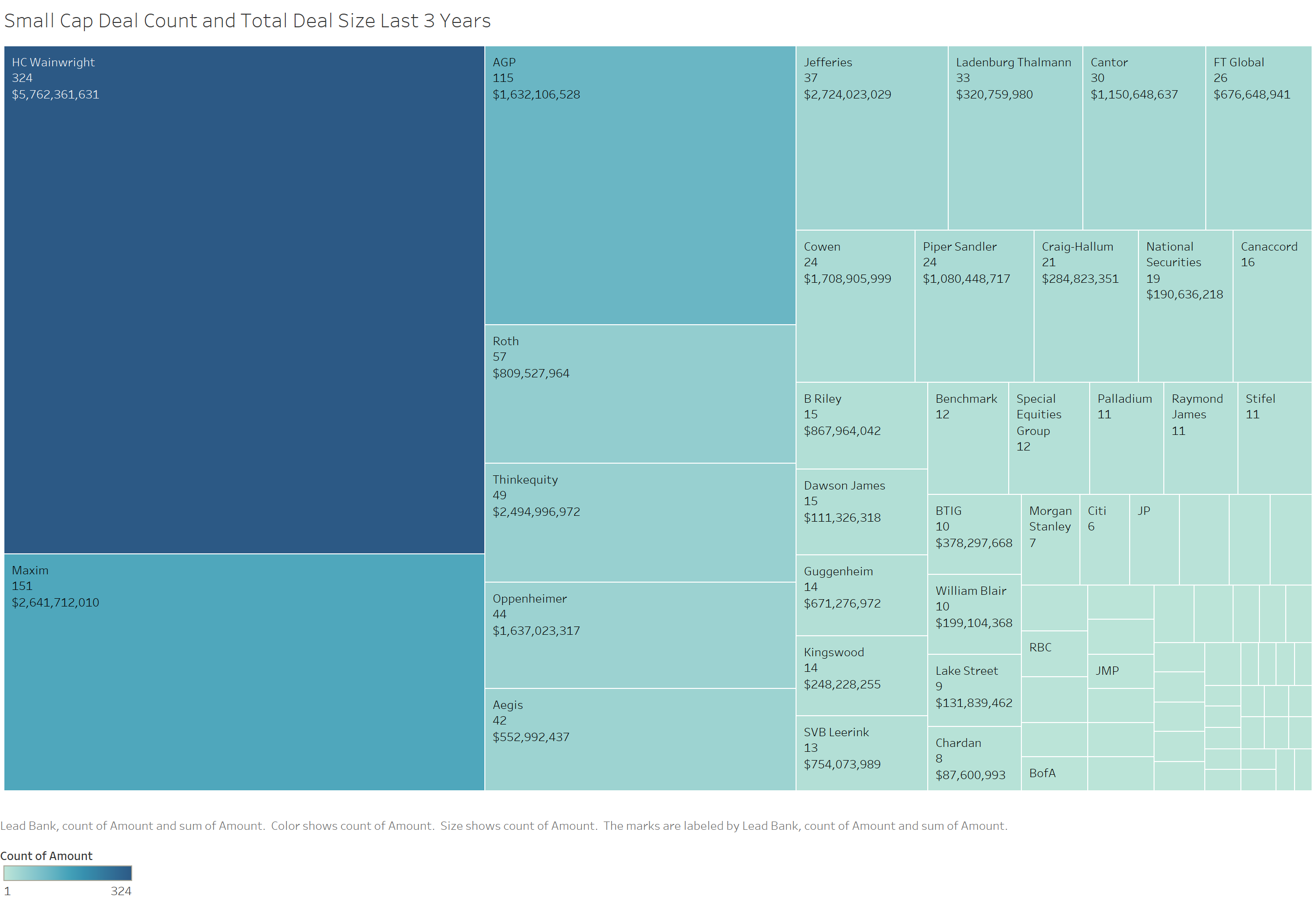 Our deal universe contains all underwritten and RDO deals for companies under $150m market cap, and also includes some larger companies that eventually grow out of the $150m market cap range. H.C. Wainwright leads the league tables with over 300 deals in the past three years, followed by Maxim, AGP, Roth Capital, and Thinkequity. The bulk of these deals are smaller deals under $25m as our universe is composed mostly of small caps. 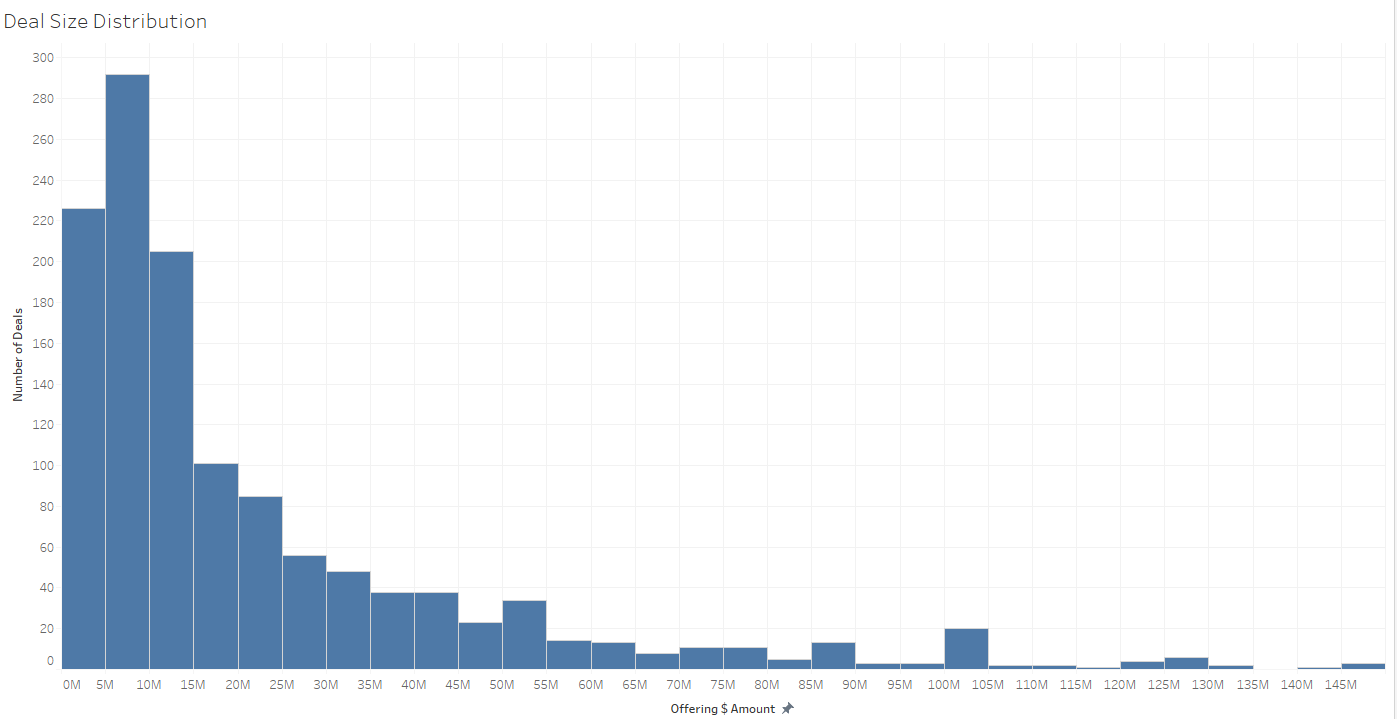 First we look at whether the negative announcement return (how much the stock price dropped after the offering pricing was announced in an official PR) differs by bank.

Note that banks with fewer than ~15 deals are not included in this chart, and the zero position of the x-axis is slightly positioned to the right. 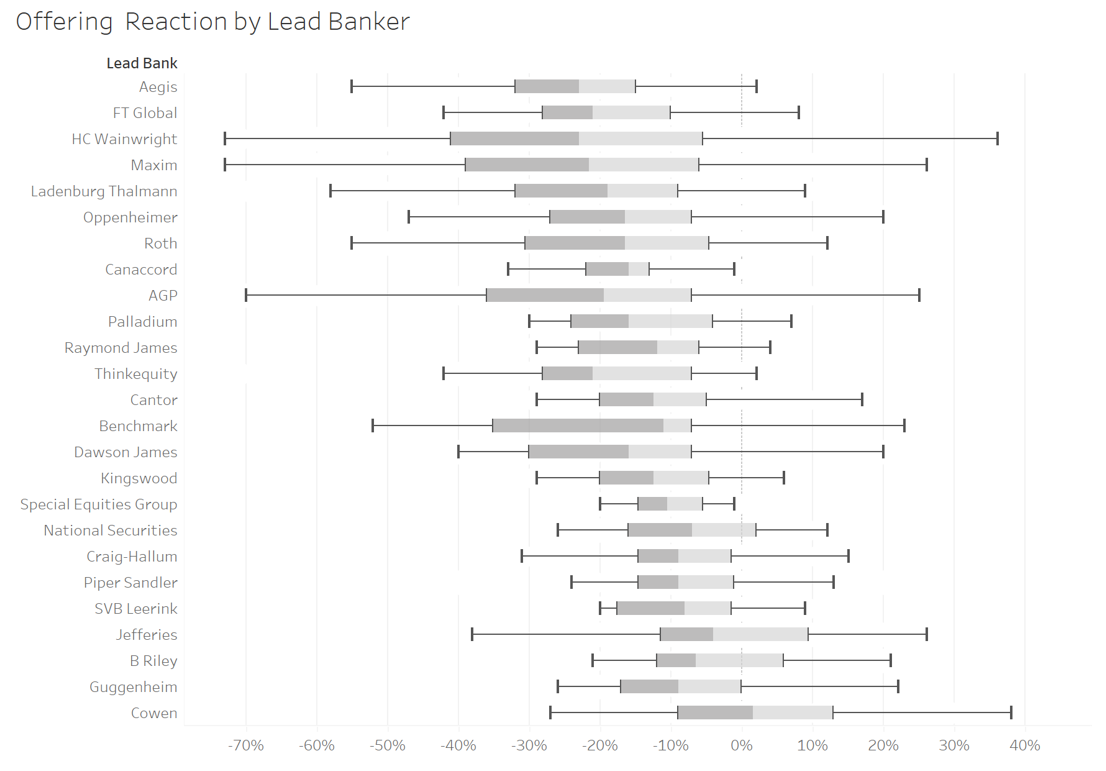 The above box and whisker plot is sorted by median offering reaction return, and we see that Aegis, FT Global, HC Wainwright, Maxim, and Ladenburg Thalmann rank highest in terms of price drops post offering. These banks tend to represent smaller, lower quality and more speculative issuers, who are more likely to take less shareholder friendly deals in order to receive much needed financing.

Some post offering returns were actually positive due to a period in January 2021 where stocks immediately went up after an offering was announced.

Note: warrant coverage describes the amount of warrants that are issued per share. For example, a warrant coverage of 50% means buyers of the stock will receive one warrant for every two shares of stock they purchase through the offering. 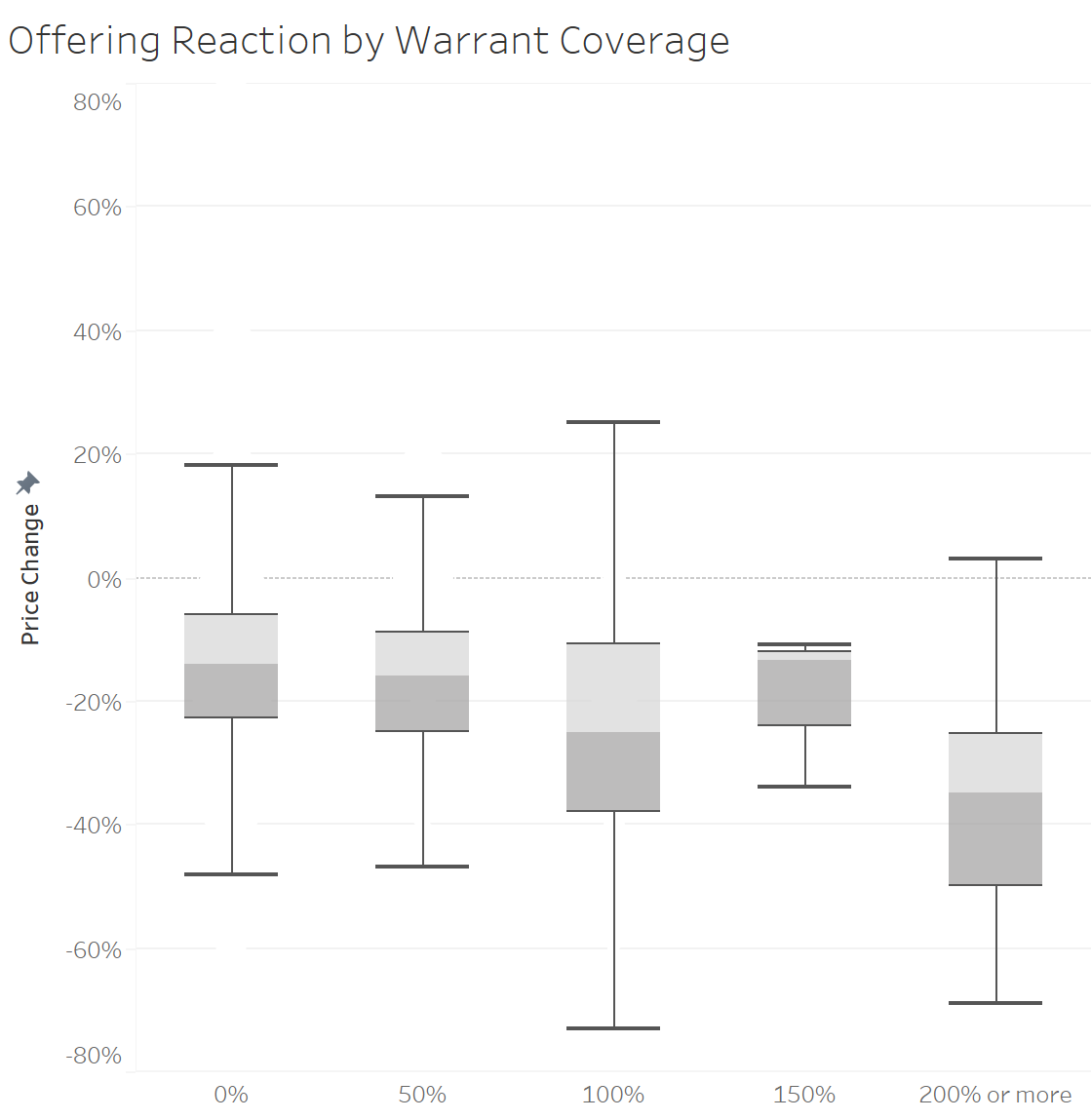 Higher warrant coverage is generally correlated with larger negative announcement returns. This is due to two reasons. First, warrants are dilutive when exercised; and second, some buyers’ strategy may involve selling shares immediately in order to only keep the warrants.

There is also a correlation between banks and the amount of warrant coverage issued on the average deal, which also negatively impacts the offering reaction return.

As shown below, lower tier banks tend to be involved in deals with higher warrant coverage. 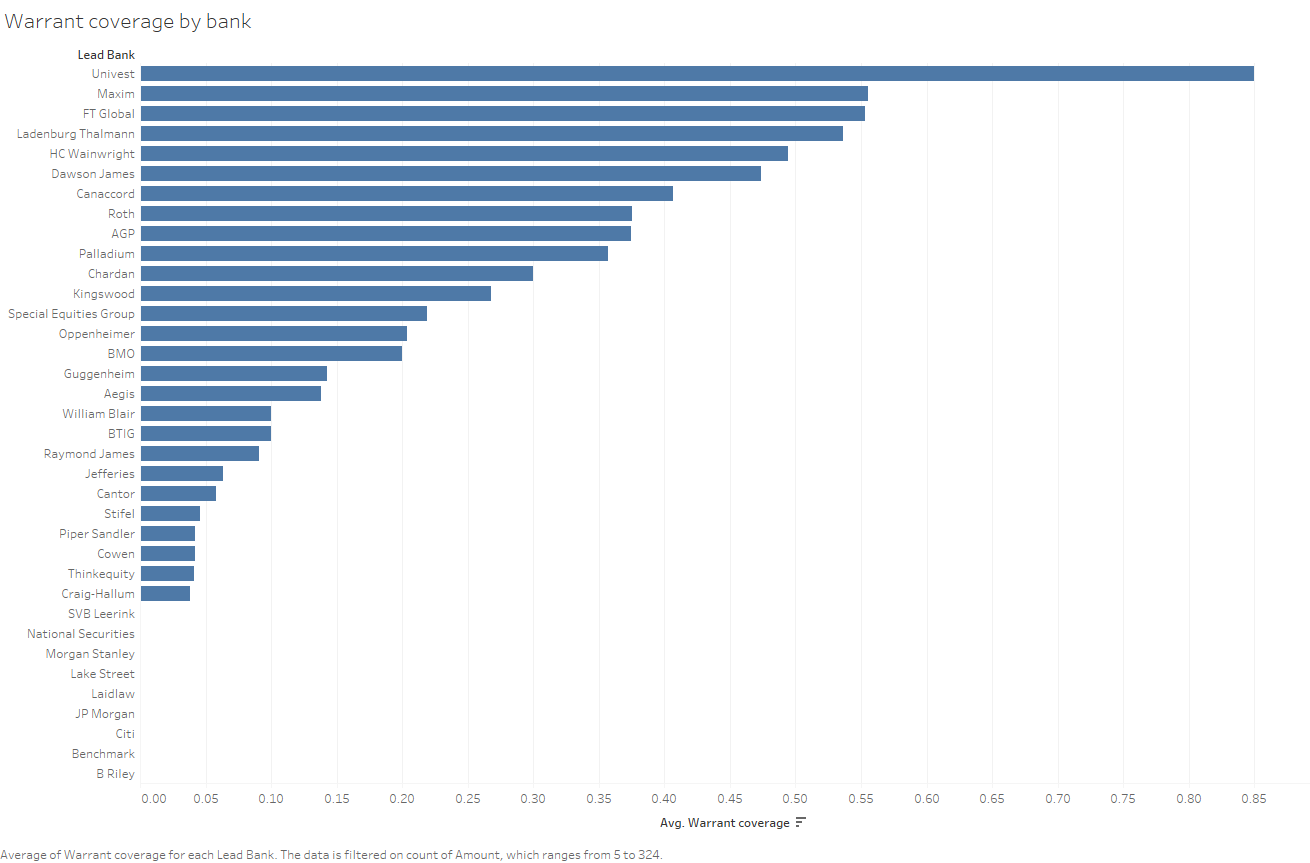 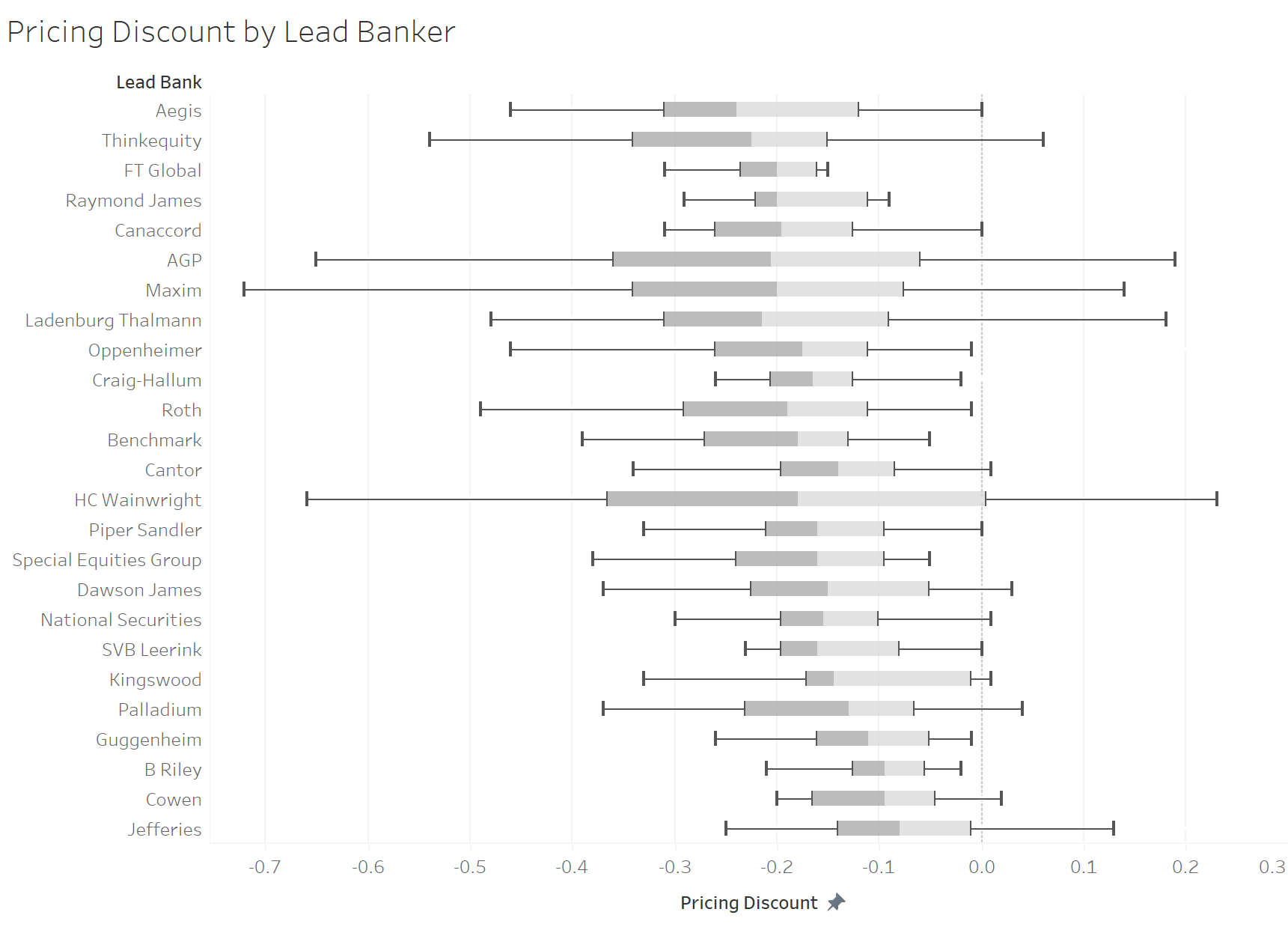 Companies with strong fundamentals tend to have lower pricing discounts as there is higher demand from long term investors. These higher quality companies are usually represented by more reputable banks. 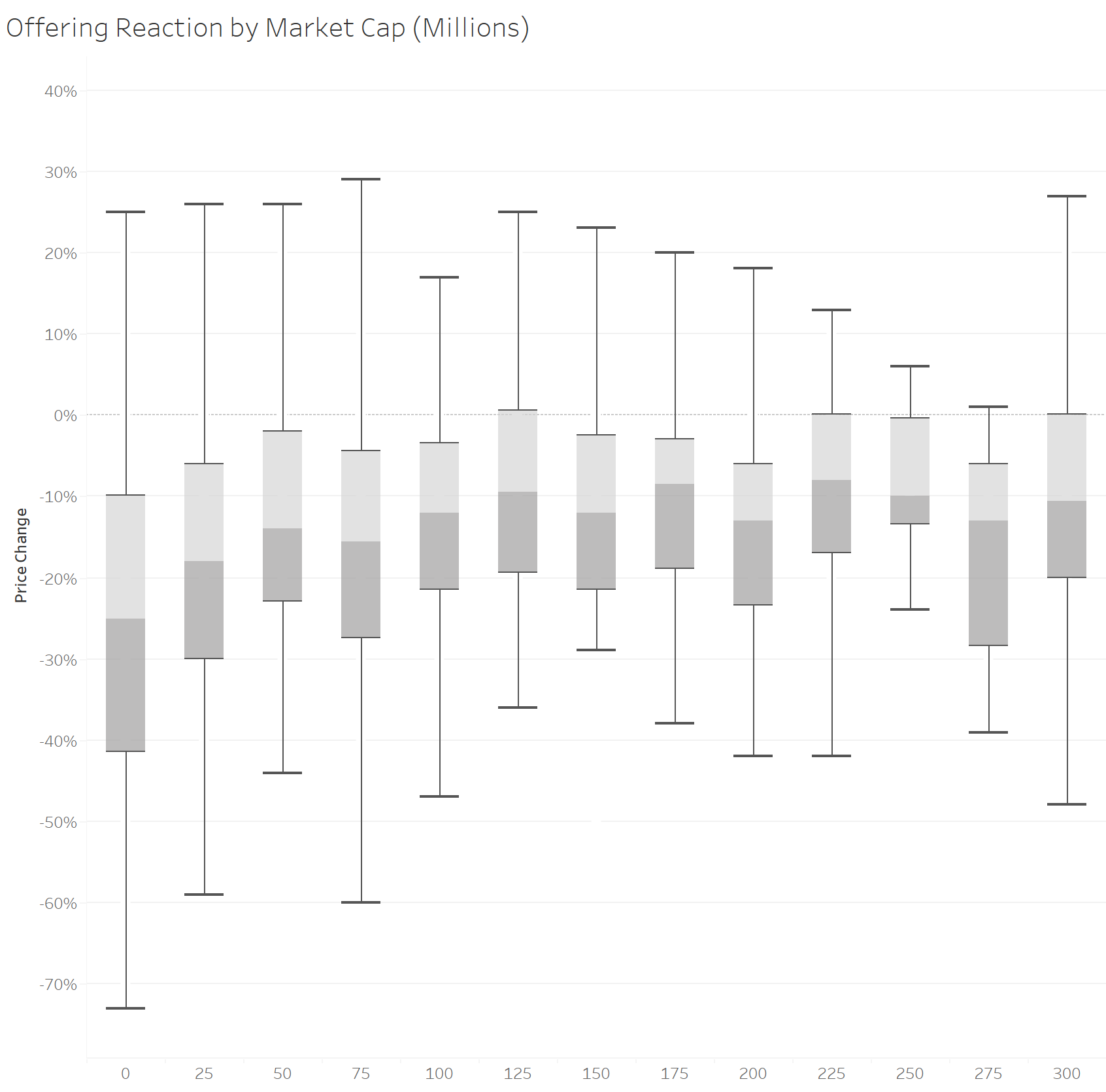 Since they are so small, the deals they take may also represent a bigger percentage of the market cap, resulting in significantly higher dilution as shown below. The median offering reaction on deals greater than 100% of market cap is close to -30% compared to -13% for deals <10% of market cap. 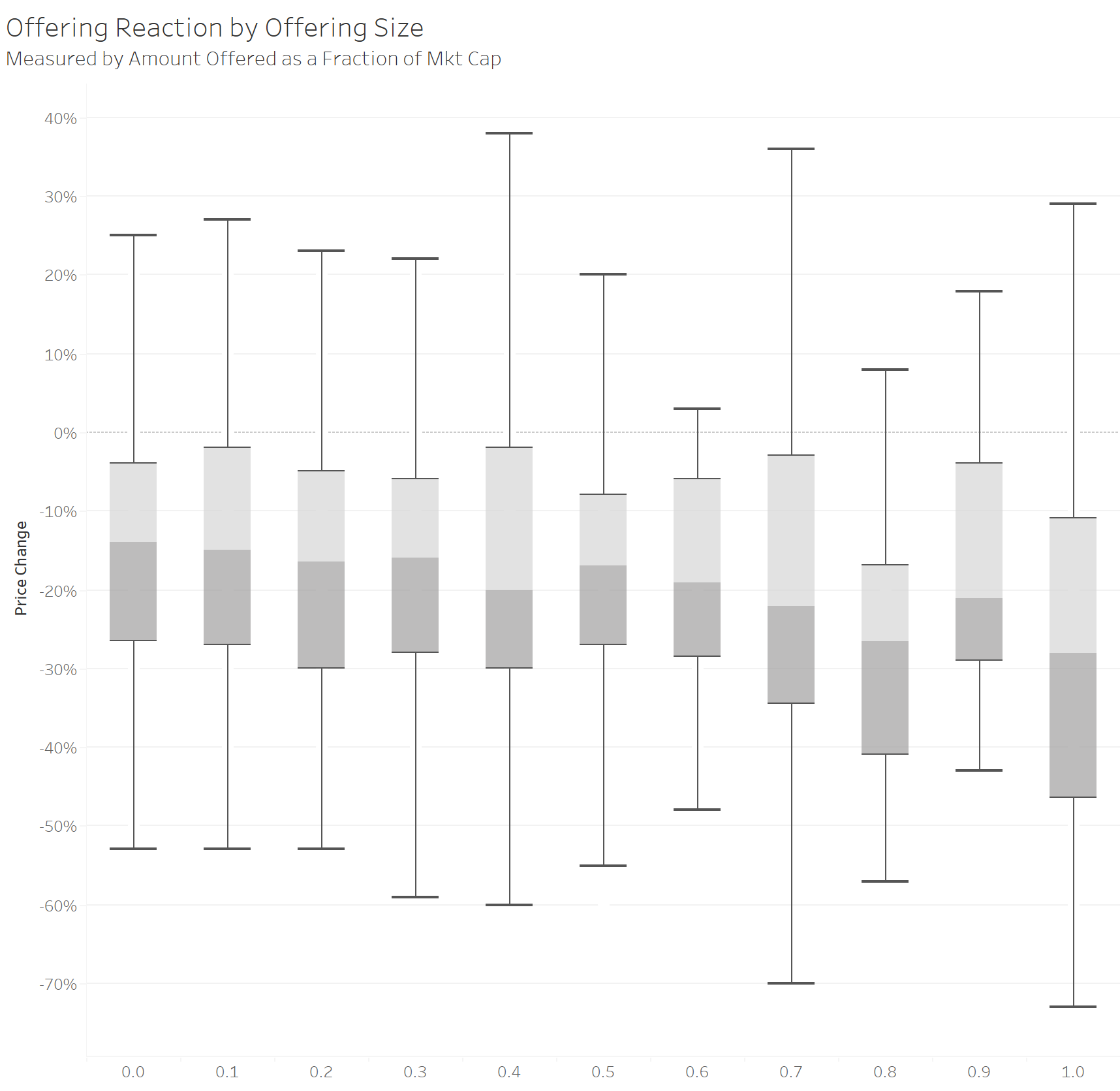 Some small cap offerings tend to occur after a large spike in the stock price. In the chart below, we show what percentage of offerings were preceded or followed by one or more “spikes”, which we define as a >50% one day intraday move.

For example, an orange bar with x=4 and y=0.3 means 30% of deals conducted by the bank spiked 4 times 30 days before and including the offering date.

We can quickly see that deals involving certain investment banks have a higher presence of this “abnormal price and volume” behavior. For example, 38% of deals involving HC Wainwright had at least one spike before the offering, 43% for Ladenburg Thalmann, 38% for AGP, and 43% for Maxim.

The implication here is when trading small cap runners that involve companies represented by these lower tier investment banks, probability of an offering happening is very high.

Probability further increases if 1) the company desperately needs cash; 2) the company hasn’t improved its fundamentals; and 3) has the capacity to raise.

3 Month Return for Going Long After the Offering

But what about buying the shares after the big offering drop? Some stocks do spike after the offering such as when they PR positive developments. Based on the data above, the probability of a spike is low, at least within our measurement period of three months. The chart below shows that the median 3 month holding period return by buying right after the offering drop is mostly negative. The two main positive periods were more related to general small cap market strength; the March 2020 Covid 19 bottom bounce and the January 2021 small cap craze. 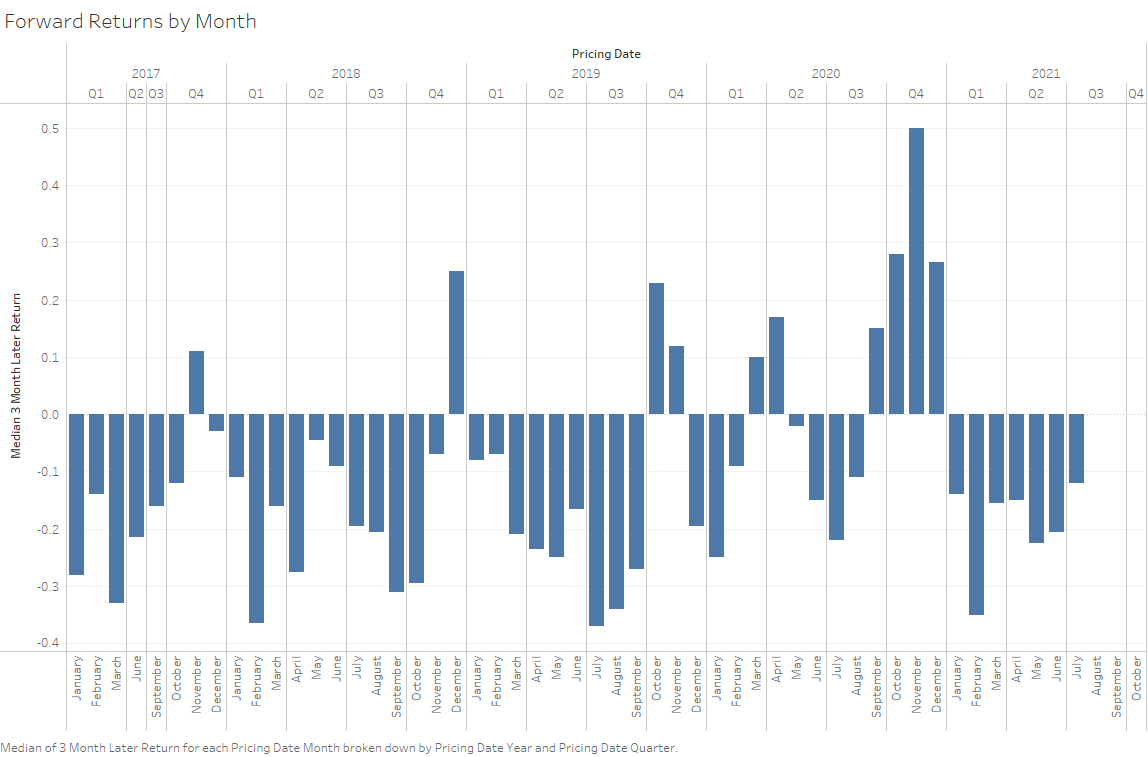 There are profitable tradable strategies that involve buying after the offering but we’ll leave that to a future post.

We have shown that for small caps, an offering causes on average a 20-30% drop in the stock price, potentially worse depending on the characteristics of the deal. Long biased traders/investors would want to avoid being caught in an offering at all costs, and short biased traders can capitalize on potential offerings for bigger trades.

One of the main use cases of Dilution Tracker is to easily detect whether a company can offer and estimate with whom. Our offering ability rating is calculated using available shelf capacity on a S-3 or any pending S-1 offerings waiting to be priced. These are the two main SEC filings required for a public offering.

Our database also shows the company’s recent offerings, which can tell you which investment bank currently represents them. Lastly, the cash need and historical dilution can give you a sense of how likely the company will want to offer. This information will greatly increase your chances of predicting which company will offer in the future.

Hope you liked this one.